The guys did a free show at the Seattle Center yesterday, the first in KEXP's concerts at the Mural. It was great, obviously! They went on at 7, and there was some pretty amazing light while the sun was setting. I love shows outside, and the mural is such a cool backdrop-especially when the evening summer light's hitting it. The guys were totally on form and in good humor. They only had about an hour, so it was a little shorter than a regular show, but looking at the recent setlists from other shows, they only had to cut out a couple songs, which is pretty awesome. And really, it was Blitzen Trapper, outside on a gorgeous, hot sunny day in Seattle. There's no bad here :)

I managed to snap some shots: 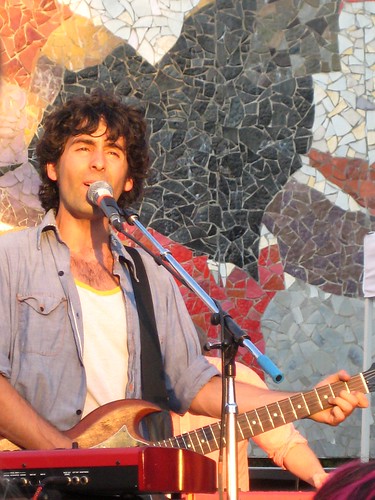 Anytime :)
A couple pass-sporting people were floating around up front shooting video, so I'm hoping some of that pops up at KEXP.org sometime. This person got a decent clip of Gold for Bread, though: http://www.youtube.com/watch?v=qRIZhnPx7LM

It was definitely an interesting crowd. Mostly a fairly typical BT crowd, but some oddballs here and there, including one older guy who was doing some SERIOUS Old White Guy Dancing. :D

Def. some great pics Granger...seems like a really cool spot to be putting on shows.

KEXP just uploaded a bunch of great video to YouTube:

Sweet! Thanks for the heads-up, Matt!